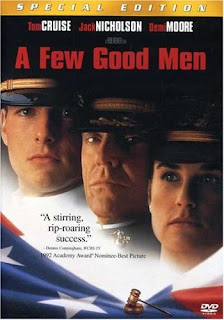 Why does a lieutenant junior grade with nine months' experience and a track record for plea bargaining get assigned a murder case? Would it be so that it never sees the inside of a courtroom?

Lt Keefe, played by Cruise, is street smart navy lawyer who tries hard not to live in his late father's shadow, a well respected navy lawyer. When he is assigned a case to defend two marines accused of causing death to a fellow marine while conducting an illegal disciplinary measure, everyone thinks that he was moving up. Moore, assigned as his supervisor, decides to be part of the defense team that includes Pollack, after she thinks that Kaffee is not taking things seriously. She believes their clients were innocent as they claimed. With evidences against them and a high profile officer, a well respected Colonel, implicated in the case, Kaffee thinks it is a lost cause. However his conscience takes the better of him and hence the battle between a meager Lt and the mighty Colonel.

The star in this movie should be Cruise as he is exceptional but in my opinion, Nicholson, acting as the hard ass Colonel Jessup steals the show. He acted his character so believably that I can't help hating and at the same time afraid of him. The rest of the cast – Sutherland, Bacon, acted really well that I really cannot find any bad acting by anyone, which is not often in the movies I have seen

This movie is complete with everything I want to look for in a movie. It is funny at times, tense on the other and it has turns and twists. Best of all, it has lots, and I mean lots, of punchlines you can use. The most famous one from this movie - 'You can't handle the truth!' have been used again and again. Watch out for that scene. You won't forget it. Few movies are this good, pun intended
Posted by Azacamis at 6:36 PM