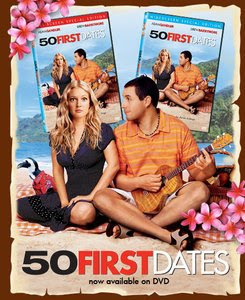 If you meet your other half who can only remember you for a day, would you still pursue on with the relationship?

I am a fan of Adam Sandler so I have watched almost all his movies. 50 First Dates is one of those on the top of the list, alongside Big Daddy and The Wedding Singer. Like it or not, Adam Sandler's comedies will be categorised as his own. He has built a reputation for himself for being the nice, funny next-door-guy and people don't seem to get tired of him. That is why I dislike it when he acts other than himself, like in Waterboy or Little Nicky

In 50 First Date, Sandler plays Henry Roth, a playboy who never thought that he will find true love. That is until he meet and later fall in love with Lucy Whitmore (Barrymore), a girl who suffers from short-term memory, a result of an accident which happened almost a year ago. She can store new memories only for a day. Once the day is over, she will wake up thinking it is the day of the accident, before it happened. That makes Henry's job harder but trade off is, Lucy's path is predictable everyday.

Sandler and Barrymore just seems to have this chemistry that makes them the perfect example of a couple who really enjoys life and most importantly each other. How Henry go to all lengths to win Lucy's heart, which he have to do over and over again everyday was funny and sweet. That is the magic of Adam Sandler when it works. It can make you relate to his character although it is a comedy.

As usual, Sandler's movie will not do without his standard antic toilet humor which is still funny though not necessary, especially in this movie. With Rob Sneider starring not just as a cameo, this is expected.

All of Sandler's romantic comedies have a happy ending, so it's no different for this one except this time though, it is totally unexpected. It's a clever ending and it makes you feel good long after the movie ends, a typical effect of Sandler's movie. Soon enough, you would want to watch it again. The ending in my opinion was an icing on the cake. It is not a typical Hollywood ending you would expect of a romantic comedy. You might need a tissue for that part, as I almost did.
Posted by Azacamis at 1:11 AM