This development is expected to be hot as it is right smack in front of the future NS12 Canberra MRT station.

There are only 2,3 and 4 room units available so those planning for a 5 room will be disappointed.

Of the two, Eastlink I will be favorable as it is the nearest to the MRT station and there is a neighbourhood centre within it which faces the station acting as a buffer between the station and the units to lessen noise and dust from the main road. The carpark is also just just two storeys high with an underground car park which means you can simply park your car, walk to the lift and go straight to your unit floor.

Except for some units in block 118B in Eastlink Two that faces north-east or south-west, all other units are either south-east or north-west facing. I personally will choose any east facing units as the morning sun is always better than the afternoon sun.

Even those units in Eastlink II facing the drainage reserve only has about 30 m to the opposite unit in another development which is under constructions.

Unit 51, 53, 67, 69, 71, 73, 87 and 89 in Eastlink I will have unblock view as it is facing Sungei Simpang Kiri and a park connector. Although it will face future high rise industrial development, it still will have at least 100 m of buffer. Another plus side is that it will be south-east facing. This is should be hot units for 4 room units.

Unit 342 and 344 in Eastlink II may be facing the internal compound but the opposite unit is at least 100 m away. This should be choice units for Eastlink Two.

All other internal facing units except for 364 and 376 in Eastlink II should be pretty fine as there is enough buffer between the opposite units and a roof garden view to boot. 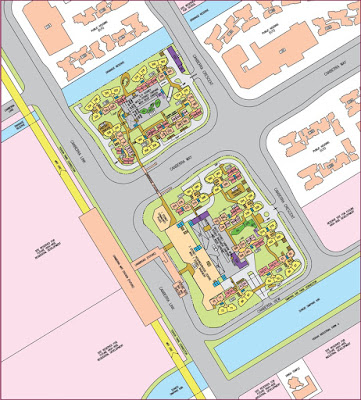