And then there's three

It was about 3 1/2 weeks ago. No one was around except for the two of us. And my cat.
She came up to me and showed it to my face. She had that same disappointed look on her that I recall a week or two ago.
"Can't be" I said, puzzled. "You must have not done it right. We'll do it again".
"Again? I don't want to" she replied, whining. "And I can't anyway. There's no more".
She was actually afraid to do it again and end up with same outcome which will only make her more disappointed.

"I'll get you a glass of water and we'll try again a while later" I said while I rushed to the kitchen and came back with a big filled glass.
She finished it up, unenthusiastically.

We then watched TV while we wait for the next opportunity. Then it came.
"I think I'm feeling it" she said.
It didn't take a second for me get up to grab the kit and rush us both to the bathroom. It was then that she asked me why was I in there with her.
"I did say 'we' just now right? So I'm doing it with you this time" I replied. "I'm going to make sure it is done right"

"But it's embarrassing" she pleaded.
It's true but I was a man on a mission and nothing was going to stop me then.

"You weren't when you almost choked me when you polluted the air in our room!" I said, countering her objection. "So come on. I'll hold the thing".

So we both took our positions. She was like my test subject who by the way still wanted to argue over how it should be done even though she blew it the first time round. So I got to call the shots this time.

When it came, it wasn't just the stick that got it but I couldn't care less.
Sensing that it got enough, I placed it flat on the sink counter and we both waited with baited breath.
It didn't take long before my gut feeling was proven right as I turned to her and said "See? I told you!". She stood there with mouth wide open and eyes almost popping out; in a state of disbelieve.
Although I kind of expecting it, my brain still took some time to register the information in. It's only after a few seconds that that I hugged her and gave her the longest kiss I could remember, right there.
And yes, we did washed up first. 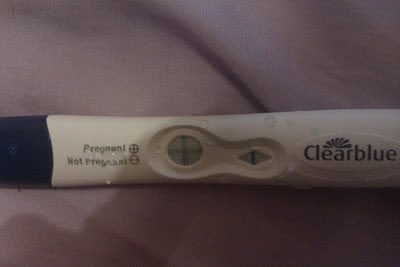